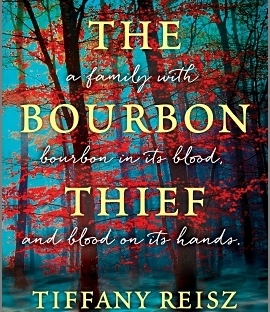 STORY: When Cooper McQueen wakes up from a night with a beautiful stranger, it’s to discover he’s been robbed. The only item stolen—a million-dollar bottle of bourbon. The thief, a mysterious woman named Paris, claims the bottle is rightfully hers. After all, the label itself says it’s property of the Maddox family who owned and operated Red Thread Bourbon distillery since the last days of the Civil War until the company went out of business for reasons no one knows… No one except Paris.

In the small hours of a Louisville morning, Paris unspools the lurid tale of Tamara Maddox, heiress to the distillery that became an empire. But the family tree is rooted in tainted soil and has borne rotten fruit. Theirs is a legacy of wealth and power, but also of lies, secrets and sins of omission. The Maddoxes have bourbon in their blood—and blood in their bourbon. Why Paris wants the bottle of Red Thread remains a secret until the truth of her identity is at last revealed, and the century-old vengeance Tamara vowed against her family can finally be completed.

REVIEW: Cooper McQueen is a very wealthy man who loves a good bourbon. While sitting in his bar, he sees a lovely dark-skinned woman walk in. When she asks for a shot of Red Thread bourbon, she is told that it has not been made in many years. Cooper introduces himself to the woman, who calls herself Paris, and after some conversation, she agrees to meet him at his vast estate, Lockwood. She tells him she is a rich widow from Kentucky. When he teasingly asks her if she is after his money, she responds that he is after his bourbon – most specifically his prized possession of a one-million-dollar bottle of Red Thread Bourbon. It is the first bottle ever made. She claims to be part of the Maddox family who were the makers of Red Thread bourbon. She has inherited the business and begins to tells Cooper the story about the beginning of the Maddox family as follows:

Tamara Maddox, has just turned 16. Tamara and her mother, Virginia, have lived with her grandfather ever since her father passed away. Her mother and grandfather are always arguing. Tamara is spoiled and bothers Levi Shelby all the time demanding to ride her horse. Levi is much older than Tamara and works in the stables of her vast estate. When Tamara asks Levi for a birthday kiss, her mother catches them and is furious. She is given a choice of sending Levi away or she will shoot her beloved horse. Her mother explains to her that when her grandfather passes away, she will be the only Maddox left and it will be up to her to keep Red Thread going. But her grandfather has a even better plan to ensure the Maddox blood survives. When the truth comes out about the different family members, the shock is enormous.

After a night of violence at her home, Tamara runs away with Levi and thus begins her life of healing from the many disturbed members of the Maddox family.

This book is one that is quite mesmerizing. Starting from slave days to the present, we see the extent that men and women will go to to get what they want in life. The story is brutal at times, but expresses love as well. This historical novel is very good. I had some qualms about the character of Paris because I felt her actions conjured up racism where I don’t think it belonged in the story.