BOOK BLURB: The year is 1881. Meet the Mackenzie family–rich, powerful, dangerous, eccentric. A lady couldn’t be seen with them without ruin. Rumors surround them–of tragic violence, of their mistresses, of their dark appetites, of scandals that set England and Scotland abuzz.

The youngest brother, Ian, known as the Mad Mackenzie, spent most of his young life in an asylum, and everyone agrees he is decidedly odd. He’s also hard and handsome and has a penchant for Ming pottery and beautiful women.

Beth Ackerley, widow, has recently come into a fortune. She has decided that she wants no more drama in her life. She was raised in drama–an alcoholic father who drove them into the workhouse, a frail mother she had to nurse until her death, a fussy old lady she became constant companion to. No, she wants to take her money and find peace, to travel, to learn art, to sit back and fondly remember her brief but happy marriage to her late husband.

And then Ian Mackenzie decides he wants her.

REVIEW: I read this book awhile ago and decided to get an audio of it because I was curious to find out how the story would play out through Lord Ian’s voice. I should have been better left off  still wondering about it and not putting myself through ‘torture’ of listening to a most horrific narration I’ve ever heard. I’m not being mean here. I’m telling you the truth as I see it [or rather ‘hear’ it’].

Let me tell you  a bit about this book. The author did an outstanding job in creating this man, and a brilliant strategy in starting her new series with such a complex, sexual and tortured character. KUDOS Ms. Ashley!

I can’t pass up a book about a tortured hero, and Lord Ian MacKenzie definitely was that. He was not a ‘normal’ little boy as his brothers were and because his father thought him ‘mad’ he was locked up at an early age in an asylum.

There they subject him to all sorts of ‘modern’ techniques, such shock treatments and ice baths, which were supposed to ‘cure’ him. That is until his brother the new Duke, rescues him after their father’s death. 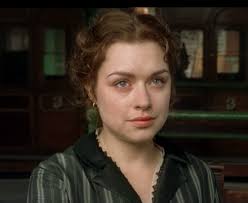 All those years behind the asylum’s locked doors left Ian having trouble dealing with crowds, yet his mind is sharp, genius like. His speech tends to be blunt, but is precise and he never speaks unless there’s something to say and worth hearing. He is a connoisseur of everything and anything that is perfect in shape, color or form, and can spend hours upon hours just staring at it; deconstructing and admiring it.

Beth Acklerly, the heroine of the book is not your typical heroine either. She may have been brought up in an impoverished home, left a poor vicar’s widow, but after a rich employer leaves her all of her fortune, Beth finally feels in charge of her life.

She accepts a proposal from a man not because she loves him, but because she doesn’t want to be alone, and that’s when she meets Lord Ian, a man who intrigues her, and someone who she is sexually attracted to.

Both Ian and Beth are as flawed as two characters can be, but both of their pasts have thought them to ‘read between the lines’ and forgo the pretense, thus grabbing the opportunities presented to them in what life is offering them now.

First, I wish this was narrated by a male narrator with a Scott’s accent. That would have been 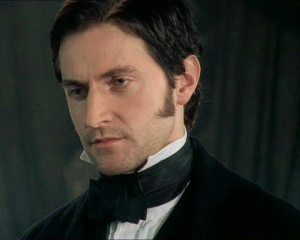 ideal and pleasurable. It would also have made me buy all the books that have come after it.

Second, the female narrator is … [I’ll try to be as gentle as I can and maintain my cool here; I don’t want to be cruel, but I must be honest!] laughable. Her narration was stilted as she tried but failed miserably in her Scottish accent; her voice is highly pitched almost every time she ends a sentence and extremely annoying. I ask you to listen to it and dare you to tell me I’m wrong.

Honestly, I wanted to cry from frustration as I know that this should have been an awesome Audiobook if only…

And speaking of ‘if only’ here are the actors that I would have cast as Lord Ian and Beth, Richard Armitage  and Daniela Denby-Ashe. Have you ever seen either of those actors before? I loved them in ‘North and South’ and I think you will too. Check it out!

And here’s my Audible review:

Enter a headline for your review:

If you could sum up The Madness of Lord Ian Mackenzie in three words, what would they be?

It’s the hero that makes this story unique. Reading it, I could feel his pain. I also loved the relationship portrayed between the brothers.

Would you be willing to try another one of Angela Dawe’s performances?

If you were to make a film of this book, what would the tag line be?

Meet the woman who tamed the mad Lord Ian Mackenzie

I was very, VERY disappointed with the narration of this wonderful and well written book. Ms. Dawe was not able to portray the most important character of this story which was Ian. His character came across too wooden, stoic, That is not what he was.Ms. Dawe’s narration is too fast, too forced and I’m sorry to say, extremely annoying. Every sentence has a high pitched ending.

Frankly, I am surprised that a woman was chosen to narrate this story. If this story had been narrated by a male narrator, I believe it would have been better. I would be willing to buy it again in that case. 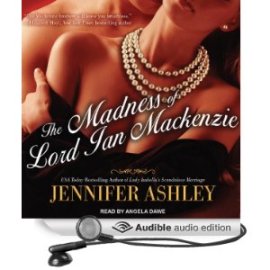